This post is fairly long, and I don’t want to bury the lede, so here it is: I’ve tracked down and digitized over 2,000 pages of copyright records from before 1870 that had generally been assumed lost.  The whole story follows, but to jump to the records, they are here (part of the GW Law Library Website).
Since I started this blog in the fall, I’ve occasionally alluded to a number of projects I’ve been working on regarding the pre-1870 copyright records, most notably in my post where I provided links to the transcriptions of a small part of those records.  As the 2015-2016 Abraham L. Kaminstein Scholar in Residence at the US Copyright Office, my efforts were focused on a descriptive and quantitative study of the Office’s records under the Pre-1976 Act, so as to complement Robert Brauneis & Dotan Oliar’s work on the records under the current Act.  Part of that effort has resulted in a study of copyright registrations from 1870-1977, on which I’ve collaborated with Saurabh Vishnubhakat to present at a number of conferences, and which we are currently in the process of writing up into law review format.
However, while doing that project, I became curious about the oldest records, those from before Copyright was centralized at the Library of Congress in 1870.  Until that point copyright registrations had been made (and the records kept) at the individual Federal District Courts.  In 1870 those records were transmitted to the Library of Congress, but it’s been fairly well-known that a substantial number of records never made it to the Library, and these records have generally been assumed lost.

The pre-1870 copyright records that made it to the Library were held by the Copyright Office until the 1930s,1  when they were transferred to the Rare Book Room of the Library of Congress, and in 1939 Martin Roberts prepared the first comprehensive study of these records.  His work provides both a narrative description of these records and a checklist of what records came into the possession of the Rare Book Room (pp. 16-19).  The main body of these records were transferred to microfilm, and this is the breakdown of of the microfilm, by number of pages per state: 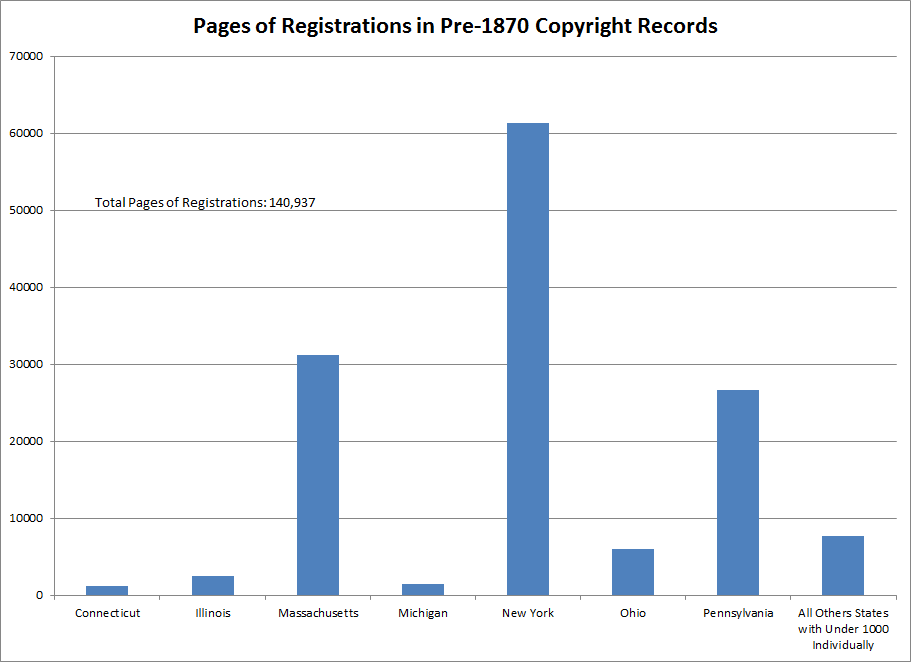 Looking at Roberts’s Checklist and these statistics, two things become clear – for New York, Philadelphia, and Boston, whose District Courts together handled 85% of copyright activity before 1870, the Library of Congress has a complete or essentially complete set of the records.  However, for many jurisdictions with a comparatively small volume of copyright activity, records may only exist for the years immediately before 1870, if it at all.  This seemed strange to me, thinking that so many Federal Court records had gone missing, and I began digging into the question.
What I’ve been describing as a unitary series of records is actually a number of interrelated records.  These are:

One breakthrough was finding the research G. Thomas Tanselle had done on the copyright records in the 1960s, which led to his study Copyright Records and the Bibliographer.  In that study Tanselle identified many records which had not found their way to the Library of Congress, and listed them in Appendix B to that work.  I was able to find all the records Tanselle listed except for the Ohio records for 1829-1842, which have continued to elude me (see below for more on still-missing records).  The work of other bibliographers, including Joseph J. Felcone and Roger E. Stoddard was also extremely helpful.  In addition, using the online National Archives Catalog, older printed sources, and systematic inquiries to the staff at each regional division of the National Archives, I was able to locate copyright records which had not made it to the Library of Congress from seventeen states as well as the District of Columbia.
At that point, I began to strategize how to get scans of these records, considering that I had no real budget for this project.  Colleagues at law schools local to various National Archives locations were able to connect me with interested law students (who had a camera), and in particular Valerie Snow, Zachary Swartz, and Preston Morgan, who assisted by digitizing materials in Waltham, Atlanta, and Fort Worth, respectively.  A number of colleagues including Brian Frye also assisted with getting scans of these records.
I am also indebted to the staffs at various regional locations of the National Archives, including those locations, Philadelphia (especially Gail Farr), Seattle, Kansas City, and more.  Thanks are also due to the members of the faculty and law library staff at the George Washington University Law School.  Finally, this project owes much to my colleagues from my time at the Copyright Office.

The staff at the Burns Law Library at the George Washington university, especially Ken Rodriguez, were instrumental in putting together a guide to these records that will be available to all.  The guide to the lost records is now online here, with links to scanned versions of these records.  Let me know about cool finds, or any other cool uses you find for these records.  My ultimate hope is that the Rare Book Room of the Library of Congress will digitize their holdings of pre-1870 copyright records (which I would guesstimate as being 300,000 pages), and when combined with this project, will represent an essentially complete record of copyright (and thus literary, musical, etc) activity in America in its earliest days.
Special thanks to the Virginia Historical Society, for giving me permission to share my scans of copyright records they hold from 1864-1865.
One set of records that is not there yet, but I hope I will be able to link to soon, is the records from South Carolina.  They are held by the South Caroliniana Library at the University of South Carolina, and I’m informed they plan to digitize them in the near future.
Also of note, the records of the Confederate Secretary of State contain information on copyrights from the states that seceded during the Civil War, and have been put online by the Library of Congress.

One interesting question to ask is “what records are still missing?”  The major set of missing records are from Virginia, where records only exist from the District Court in Richmond (the busiest by far in that era) for 1867-1870, although the inclusion of records from 1864 and 1865 in this project ameliorates the problem slightly.  There is also a printed list of copyright records for 1790-1844 from Richmond, taken from a source that no longer seems to exist. I’ve included a list of other states with records that are still missing below, note that it may not be exhaustive – in particular a list of records received from the US State Dept. in 1870 (that I located and scanned from the Library of Congress Manuscript Division) suggests that there may be some substitute records for these jurisdictions for dates after 1831:

Looking at the Guide, people may note that there are also uploads of letter books as well as what I’m referring to as “ephemeral” copyright records, both held by the Manuscript Division of the Library of Congress.  I plan to blog more about those next.

As I noted callings these records as “lost” is a bit misleading – or at least my wan attempt at clickbaiting.  However, they have been essentially unknown, especially to the legal community, and I hope this will spur interest in a fascinating area where law and culture converged in early America.