Robert Fulton is generally remembered as the inventor of the steamboat.  There is some controversy over his debts to previous inventors, but Fulton was the one able to develop a steamboat which was commercially successful, and which led to the rise of steamboat transit.  I hadn’t thought about it much, but his patent in his steamboat is one of the key documents in the history of American invention and technology.  That changed a bit ago when Adam Mossoff tweeted this out about how the patents Robert Fulton took out in his famous steamboat were lost, and I couldn’t just leave it be.

On this date in #innovation history: Robert Fulton gets a second #patent in 1811 for his #invention of first commercially practical steamboat (unfortunately, his patent was lost in the fire that consumed the US Patent Office in 1836) @uspto #PatentsMatter #IndustrialRevolution pic.twitter.com/Q6fs79kQRl

Perhaps nothing gets my attention more than saying that something is “lost,” so I had to look into it.  It turns out that the patents are less lost than has commonly been assumed.

As Adam mentioned, in 1836 a fire at the Patent Office destroyed essentially all the patent records.  An effort was made at the time to rebuild the files of the Patent Office from 1836 and before, and that reconstruction included a numbering scheme that led these to be called the “X Patents” to distinguish them from patents issued after the fire.

Are you familiar with the "X patents"? The Patent Office caught fire in 1836, and destroyed many patent documents and models. Today, the search continues for these X patents. See more #patent history at #10MillionPatents: https://t.co/MNwjTpKijl. pic.twitter.com/XeUNejw21p

Although there has been some work to reconstruct them from extant sources, Adam is correct that the Fulton patents are generally presumed lost.  However, a bit of looking revealed that a copy of the original patent does indeed exist, and I’ll include scans below, although the quality is sometimes less than ideal.  In the midst of the great depression, an heir, presumably of Robert Fulton, offered to sell the New York Public Library the patent documents and some related materials for $3,000 (roughly $50,000 today).  The Library declined, but did make photostats of the documents.  The New York Public Library still has these photostats, and I was able to photograph them, and then did some basic processing (converting the negative photostats to positive documents, for instance).  The photostats are held today (unsurprisingly) as part of the the Robert Fulton collection, in the Manuscripts and Archives Division of the New York Public Library. These aren’t of reproduction quality, but they allow us to see the patent and what it claimed fairly clearly.  The original documents are still at large, and at the end of this post I’ve included some leads on where they might be. 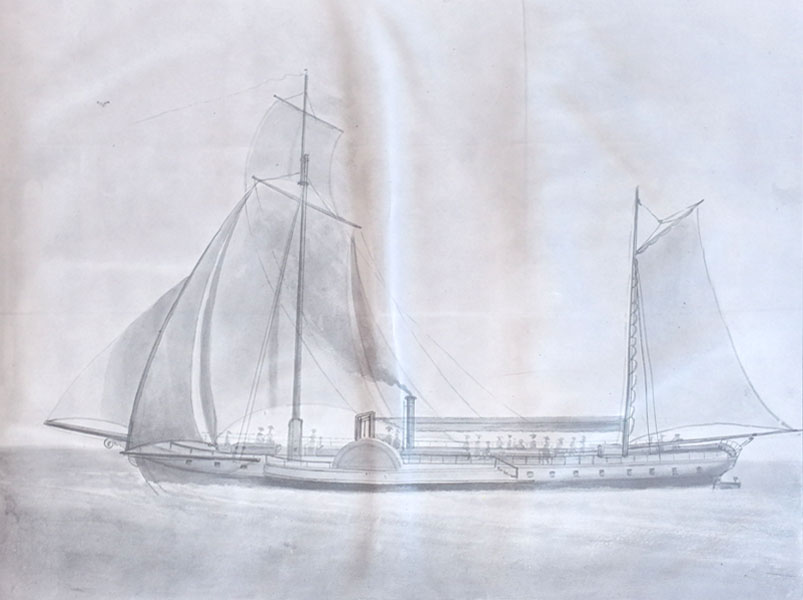 Drawing taken from the patent file.

The documents I found include the patents not just of Robert Fulton, but of John Stevens as well.  Stevens and Fulton had competing patents/steamboats, and Fulton’s exclusive license for New York was a major bone of legal contention, until the U.S. Supreme Court found that license to violate the commerce clause of the Constitution in the  1824 decision in Gibbons v. Ogden.  Note that some of the patent documents are a bit blurry, but the latter documents which include technical details and drawings are fairly clear and focused.

This is taken from NYPL’s description of the items:

As indicated, in May of 1934, Mrs. Leta Forsyth Thomson, 131 West 76th Street, care of Carrie S. Hasbrouck, New York City, offered to sell this document for three thousand dollars.  The address is no longer good of course (the internet shows a number of sales in the past two decades, let alone before), but it’s all the information I have.  I did some brief genealogical searching on these individuals and largely came up empty – I’d be curious if someone else can do better.  Presumably they still have the originals.