As folks to this blog likely noticed, I engaged in a project to bring together all pre-1870 copyright records, which culminated in a post earlier this year. As part of that project I was able to find a few records from Louisiana from 1837 and 1838. These were located in the National Archives Regional Division at Ft. Worth, but I wasn’t able to actually go there myself to see if there were any more. So when I had a chance to go to Ft. Worth to present at the IP Scholars Roundtable in October, I figured it would be a chance to double check the record books myself and see if there were more copyrights there.

Even the Archives are bigger in Texas. pic.twitter.com/nIQHydqMgS

So, I went to the Archives, and decided to photograph the record books for the pre-1851 time period as well as looking through them (recall that the Library of Congress has copyright records for the federal court in New Orleans for 1851 on.  I figured I might find more than the student who looked at the books originally had found.  The National Archives catalog entry says that the series of record books is case papers, copyrights, and appointments, but in reality it’s mostly bonds and such documents related to pending litigation.  I’ve uploaded my scans the two volumes to The Internet Archive, and everyone is free to look themselves, but there are no copyright records for years other than 1837 and 1838.

However, I realized that the copyright records had to be somewhere, and I knew I wouldn’t have a chance to be in Ft. Worth again for a while.  Accordingly, I decided to look at the Minute Books of the Louisiana District Court on microfilm, which is where I found this: 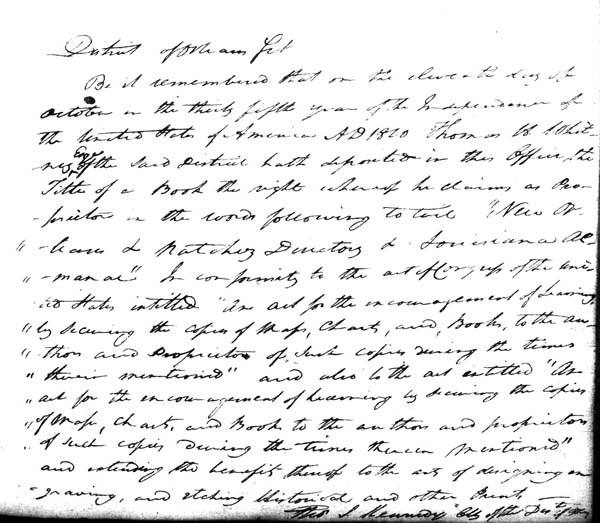 It’s a little difficult to read, but this indicates that on October 11, 1810, Thomas H. Whitney (fixed, I originally thought it was White) registered a book for copyright entitled “New Orleans & Natchez Directory and Louisiana Almanac.”  I’ve also included a link to the introduction to the microfilm and a reproduction of the complete page containing this registration here.  The volume has a mark on the first page indicating that there is a copyright registration on page 257, along with a few other indications of highlights in the volume but no other mentions of copyrights, strongly suggesting that this was the first copyright in Louisiana.

I haven’t taken the time to go through the remainder of the minute books on microfilm, which would be extremely laborious, but this at least suggests that there may be more copyright records there, pointing to a resolution for where at least some of the missing records are.  It’s also instructive for the “lost” records from the early Republic, suggesting that just because we don’t know where they are, it doesn’t mean they’re necessarily lost forever.